No Result
View All Result

Hospital for Special Surgery, the official hospital of teams such as the New York Giants, Mets, Knicks and Liberty, brings injury prevention expertise used in professional sports to youth athletics – where more than two million injuries a year are documented at sports high school and nearly 30,000 result in hospital stays.

The total cost of these injuries amounts to approximately $5 billion per year in the United States, which HSS aims to reduce through its new “Move Better Play Better” initiative. The hospital will select 50 US high schools for the upcoming school year to receive free online educational workshops and recommended exercise programs focused on preventing musculoskeletal injuries, which are on the rise among young athletes.

“There’s little fluctuation here and there where we’re hoping preventative interventions make a difference, but the overall trend is up,” said Joseph Janosky, director of injury prevention programs at HSS. “And when it comes to injuries, obviously that’s not good.”

Janosky counts improved diagnostics – coaches and trainers being better at identifying injuries – and data collection as reasons for the increase in recorded injuries for today’s young athletes compared to previous generations. Other contributing factors include rising obesity and screen time.

“The general level of fitness and the level of ability of children to participate in sports with the tools and physical abilities they need is declining. We see obesity rates were high before the pandemic and higher now,” Janosky said. “We look at the results of fitness tests that take place in physical education classes, and those scores continue to drop. Limited physical education, lots of screen time, children not achieving required levels of physical activity daily or weekly, lead us down this path of poor movement quality.

Schools in the new program will have access to a learning management system that offers on-demand video modules on how to perform fundamental movements correctly. Janosky believes that adapting recommended exercise routines can prevent half of all musculoskeletal injuries and reduce a third of all injuries, including concussions that can be prevented by better body control. 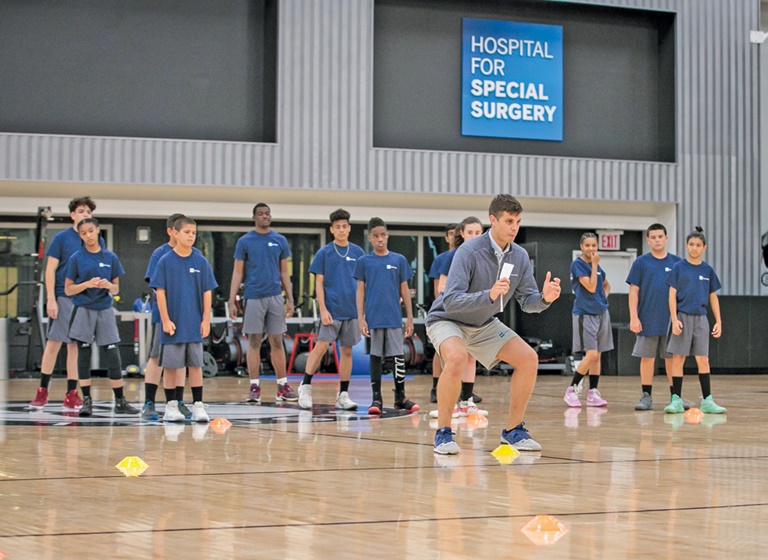 Athletes participate in a workshop to show them how to move better and reduce injuries.Courtesy of Hospital for Special Surgery

“Historically, we’ve always delivered content live, face-to-face, in real time. The pandemic of course changed things and pushed us to do things virtually,” Janosky said. “We’re able to make all of this content available on demand, so coaches, parents, and kids can complete these things asynchronously at their convenience.”

Risks of common musculoskeletal injuries such as ACL tears and ankle sprains can be correlated to an athlete’s movement patterns as they run, jump, land and change direction in a way that exerts a excessive pressure on his ligaments and muscles. HSS conducted a pilot project with around 1,000 children where they recorded a video of each performing five movements which are variations of the squat and vertical jump, manually analyzed by biomechanical experts.

“The way our selection works is that you are graded on each of these five tasks. A score of five is bad; this means that out of the five tests, the risk factor was present in all five tasks,” Janosky said. “The average score of the pilot group is around 4.2. We are amazed that if we convert this to a percentage, about 84% of the tasks performed by these children for the risk factors are present. That’s a really scary number.

Janosky notes that a study by researchers at Britain’s Anglia Ruskin University found screen time for children aged 6 to 10 increased by 80 minutes a day compared to before the pandemic. HSS’s exercise content will be delivered to children through screens, but Janosky notes that “passive screen time,” like sitting in a beanbag to play video games, differs from “active screen time. “, like watching your Peloton instructor during cycling workouts.

“We were in a really bad spot, before the pandemic, and now we just added 80 minutes of passive screen time for kids in one day. This is a huge factor that we have to fight against,” he said. “We can now use technology and active screen time to engage children in being physically active to protect them from these injuries.” 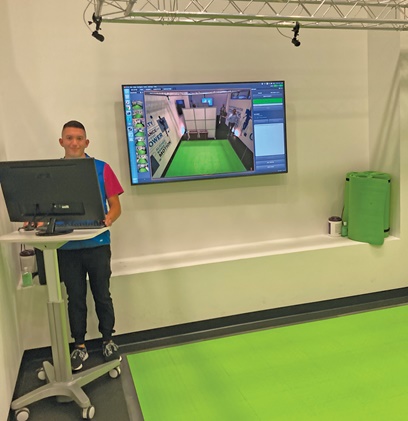 During the pandemic, the Hospital For Special Surgery created new digital content used to train athletes on how to avoid injury and identify risk factors.Andre Cohen

The hospital plans to launch a mobile motion analysis app later this year that uses computer vision through a smartphone camera to identify signs of injury risk in the movements of young athletes. The Dari Motion biomechanical analysis AI camera system and Proteus Motion strength machine, whose investors include HSS and golf star Bryson DeChambeau, are installed at HSS’s new How You Move Lab in Stamford, Conn. Movement assessments start at $99 per session, and HSS will offer lab visits for kids interested in further training.

“We use markerless motion capture [from Dari Motion] and Proteus, who [measures] power and acceleration in 3D, and having that technology give us information,” said exercise physiologist Polly de Mille at the How You Move Lab. “It will pick up any kind of deviation from some sort of ideal alignment as you move.

“Kids now specialize very early and practice their sport. They don’t learn how to jump and land, at least the kids we’ve seen. Nobody really does strength and conditioning. It’s just the sport all time,” de Mille said.

If Janosky could speed up time, motion capture technology used in professional sports is high on the list of tools he would like to see extended to youth sports.

“The technology has now evolved to the point where they can see specific body angles and look at things like kinematics, and look at the angle of the hip, for example, or the elbow if it’s a baseball player throwing” , did he declare. “So this technology is mind-boggling, the amount of data they generate over a game duration. Obviously we have a long way to go before this is applied at lower levels.

No Result
View All Result